If there’s nothing us writers like more than reading a great book, it’s seeing how that book came to be. Lucky for us, we got exactly that when Rowling released a snippet of her outline for the fifth Potter book, Harry Potter and the Order of the Phoenix.

Problems with Order of the Phoenix

First, let me say that Book Five is my least favorite of the bunch. It’s an 870-page beast with a number of redundant scenes (like when Harry is either dreaming or arguing). Even Rowling wishes it had been better edited.

Still, the book deserves praise, especially considering its intricate plot and the abundance of characters (and all written on a tight deadline). Stephen King said he liked the fifth book “quite a bit better” than the previous four, and added,”Harry will take his place with Alice, Huck, Frodo, and Dorothy, and this is one series not just for the decade, but for the ages.”

In recent posts, we saw how Rowling’s plot for the Sorcerer’s Stone hit all of the structural milestones necessary for a tight-knit novel. But now the question is, how exactly did Rowling develop her story idea into seven weighty books?

For this post, I’ll be drawing solely from Stuart Horwitz’s groundbreaking book, Blueprint Your Bestseller: Organize and Revise Any Manuscript with the Book Architecture Method.

Ironically, I frequently used the word plot in my last post, but now plot is a four-letter word. Horwitz explains why he dislikes the word so much, and I have to say, I agree with him.

For one thing, [plot] is a term with nearly unlimited associations. It’s hard to get anybody to focus on what is actually going on in their book while they are worried about whether their plot is good. For another thing, plot is singular, as if it somehow references everything. As such, you can’t work with a plot.

Rowling obviously agrees with Horwitz, because look at how she structures her outline for Order of the Phoenix. (You can enlarge my transcription below by clicking on it. I cleaned up the outline by writing out abbreviations and completing sentences.) 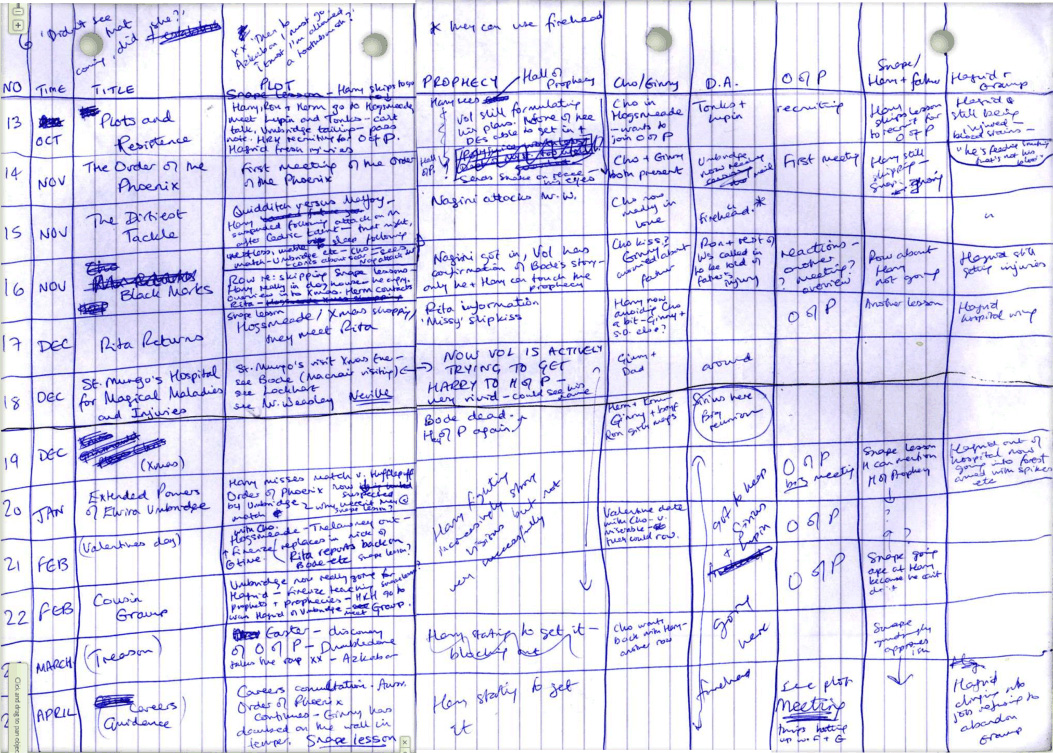 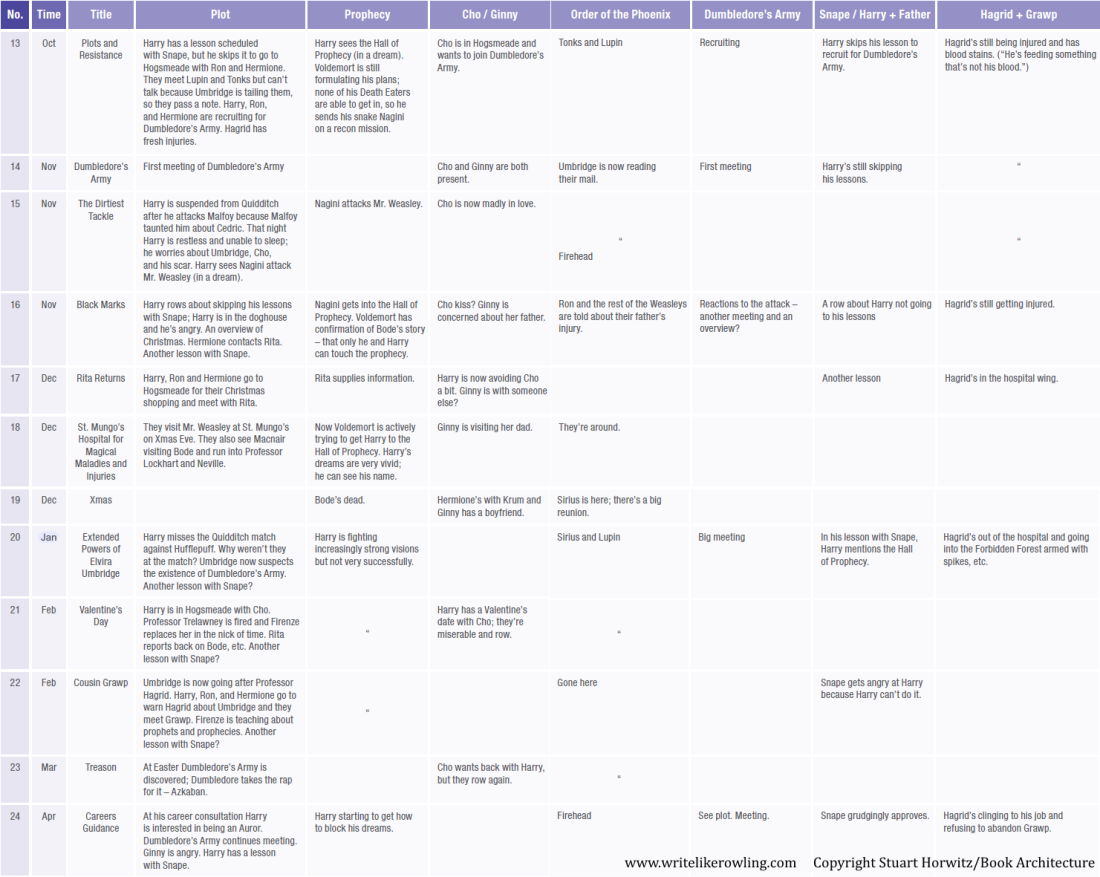 Series is what Horwitz says should replace plot (and sorry, the plural of series is series). Although Rowling uses the word plot, notice her outline isn’t simply one chaotic column that’s trying to track everything. Instead, she divides the action into six columns of individual series:

1. The Hall of Prophecy

2. Harry’s feelings for Cho versus Ginny

3. The creation of Dumbledore’s Army

4. The creation of Order of the Phoenix

6. And the mystery of Hagrid’s half-brother, Grawp

The end result is an engagingly complex novel—not because Rowling has one twisty-turny plot, but because, as Horwitz says, she breaks down her story into “clear, meaningful series that intersect and interact in unusual and consequential ways.”

It’s actually quite simple what’s going on in Order of the Phoenix: A teenage boy is trying to juggle his school work, his friends, his enemies, and his first romantic relationship. But Rowling has these series collide with each other in surprising ways to create a feeling of complexity. As Horwitz says:

How you handle your series will determine your readers’ forward progress and their level of commitment to your work. Series is how people become characters, how objects become symbols, and how a message repeated becomes the moral of your story.

In my next post, we’ll look at exactly how Rowling brings these series to life.

For more posts on Rowling’s Outline and the Book Architecture Method: